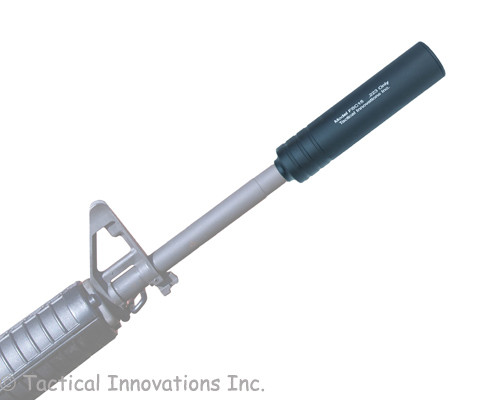 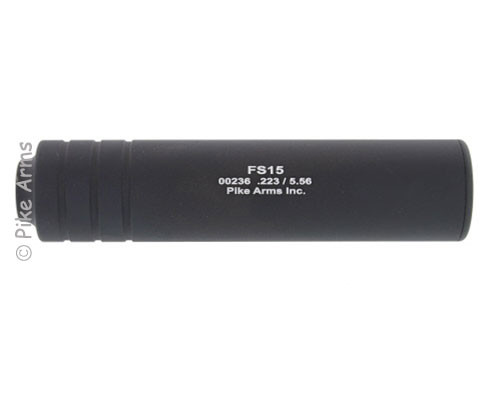 Want the suppressor look and feel for your AR15 without all the paperwork hassle and transfer tax expenses? Our  AR15/M16 FAKE SUPPRESSOR is as close to a real suppressor as you can get without paying the tax stamp. Its CNC precision machined from solid aircraft grade aluminim with a durable cerakote finish and is professionally laser engraved identically to our real NFA registered suppressors.

Since its a fake suppressor, the sound is not reduced and bullet impact is not changed. Although, many customers do prefer the weight and balance improvement that the suppressor provides. Its perfect for use on an AR15 that is threaded 1/2x28 in place of the traditional flash hider.    Of course it will also work on any other .223/5.56 firearm that has the barrel threaded 1/2x28 TPI.

Don't let the low price fool you... We are the source and manufacture 1000's of fake suppressors to supply other major manufacturers, distributors and resellers. You won't find a better fake suppressor at ANY price.

Order today and get your gun lookin' right!

Ordering Restrictions: No sales to CA or where otherwise prohibited. A pistol with a threaded barrel in CA would be a restricted Assault Weapon and is prohibited.

Note: Due to the thread timing relationships between the AR15 threaded barrel and the fake suppressor, the position of the engraving on the fake suppressor when screwed on will randomly stop at any position. Although it has rarely been an issue, we have no way to determine where the engraving will stop on your gun. The engraving can be oriented at any position with the use of a standard AR15 crush washer, which is not included.

Of course the AR15 that is shown is for reference only and is not included.

By Chip Of Florida
Real enough looking to get you stopped means that it looks VERY real. The range officer at out local range told me I couldn't shoot with a suppressor since its against the rules (very stupid rule). So I tell him its not a real suppressor and he says I still can't shoot with it! I tell him it a "barrel extension" that looks like a suppressor and he walks with me to my shooting position to hear a shot fired. Of course it was regular loud and he says he will allow it THIS TIME! If you want one that looks real I can recommend this one.
78 people found this helpful. Was this review helpful to you?
By Travis Of Florida
WOW!! it helps with balance and aim , just the view of it makes the gun seem so much more solid , I cant belive the quality and realizm of this fake silencer AMAZING!!! got my vote thanks
41 people found this helpful. Was this review helpful to you?
By Eddie Of New York
Awesome product. Wanted the look of an SBR while abiding to NY laws. Cut my barrel down and spot welded this sucker on. I cant shoot this gun without getting complements on how good it looks.
11 people found this helpful. Was this review helpful to you?

Installation is fast and easy and requires no tools or gunsmithing.

2. Screw 5.56 /.223 FAKE SUPPRESSOR onto firearm's existing threaded barrel.  Hand tighten until securely seated on barrel.  Do not over-torque.  Use crush washer (not supplied) to position engraving to preferred orientation if desired.

3.  Remove lead and carbon from inside of 5.56 /.223 FAKE SUPPRESSOR using pistol cleaning bush and bore cleaner.