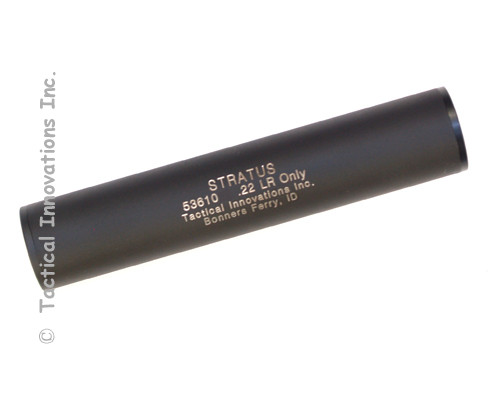 The STRATUS Suppressor combines strength and super lightweight construction into one premium package.  At a total weight of only 2.4 ounces, the Stratus Suppressor is so light you will not be able to tell its attached to your firearm, while still providing excellent sound suppression performance on both rifles and pistols.

Our TAC65 suppressor is as durable as it is beautiful. The suppressor tube and both endcaps are matte black Type 3 hard anodized. Anodizing is not a paint or a spray on finish, its a molecular change in the material that forms crystals (like diamonds) on the outside of the material. Its the same finish that space and defense contractors and the military require on their parts. The 1/2 x 28 threads that mount the suppressor are also hard anodized.

We are frequently asked about steel or titanium inserts for suppressor mounting and don't think it is necessary or useful. In the event the suppressor is not unscrewed from the host firearm for a long time after a lot of shooting, the suppressor can be difficult to unscrew from the firearm. If you have a steel barrel and either steel or titanium for the suppressor mounting and either the barrel or the suppressor thread is going to be damaged to get the suppressor off, we would prefer to see the suppressor cap stripped rather than the threads on the firearm. Its much easier, and less expensive, to unscrew and replace the endcap than to have to get the barrel threaded again. Its been our practical experience that hard anodized endcaps are far more durable than needed thus making steel inserts costly and unnecessary. However, if you want or need a steel insert, don't settle just for an insert, our QUEST SUPPRESSOR is completley manufactured out of stainless steel at a price that most other manufacturer's charge for their aluminum suppressor.

By Doug Of
This thing is so light I thought it was empty! and its so quiet we shoot it in the back yard and no one cares. The little wood box was a nice unexpected extra. If you want a nice suppressor, this is the one to get.
86 people found this helpful. Was this review helpful to you?
By Aaron Of Missouri
I just got my new Stratus can and the difference is immediately noticeable. It is light and yet sturdy and when paired with the Tac thread adaptor and threaded barrel, it significantly suppresses the sound of both my Walther P22 and Ruger 10/22. You definitely can't beat the cost and the construction is top notch. I know these guys make these cans in-house and their work is excellent. I highly recommend picking one up if your local laws allow, especially at this price.
38 people found this helpful. Was this review helpful to you?
By Larry Of Washington
The Stratus was my first suppressor, I have been very pleased with its performance it now has close to 2000 rounds through it and works great. I have found that coating the baffles with militec and a heat gun a couple of times makes cleaning the suppressor much easier now I use a nylon brush to clean off the baffles instead of having to use a steel brush. I clean it about every 600 to 800 rounds or so. Great can
26 people found this helpful. Was this review helpful to you?