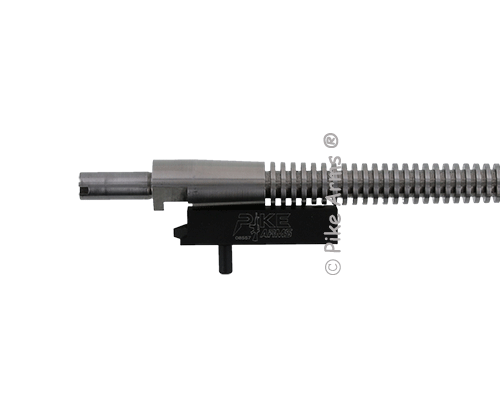 Each part is billet CNC machined then professionally either hard anodized or blued to ensure exceptional durability and reliabily and are ready to be installed on your Pike Arms® Takedown barrel.  None of the parts are cast or MIM injection molded.

1) Attach the barrel locking block (08557) oriented with the open end toward the chamber end of the barrel, with the supplied screws (08619).

4) Compress the lock, retainer, and spring into the locking block until the actuator (08616) can be inserted through the slot and into the barrel lock.  The actuator should be held in place by the retainer when fully inserted. NOTE: often one side of the hole in the lock is tighter than the other, it may be helpful to check the fit of the actuator in the barrel lock prior to assembly and orient the lock accordingly.

5) To disassemble; pull the retainer back with a pick or small screw driver to release the actuator.  At the same time pull the actuator out of the barrel lock/locking block assembly. The lock, retainer and spring can now be removed to gain access to the screws.
PROP 65 WARNING: