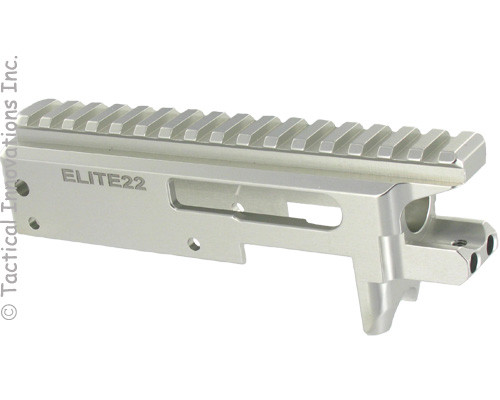 By Timothy Of Missouri
Very good product. Smooth around the edges, dimension tolerances are right on. Have built one rifle withe the Elite 22, working on another. Shells slide right in and eject right out; what more could you want? Built in full picatinny rail is longer than the factory bolt on and thus allows a greater range of optics placement. Tough and durable anodized finish is way, way better than the painted finish you get from the factory. It is no longer possible to buy a fine 10/22; you have to build one yourself, and the Tactical Innovations Elite 22 receiver is a major component in the process of creating a rifle that has value, class, and character. Get one (or several) today! You will not regret it.
6 people found this helpful. Was this review helpful to you?
By Fred Of Nebraska
I have been using the Elite 22 for over two years to build my custom rifles. During that time, i have not used a single Ruger receiver. Why bother? When it comes to precision, features, and looks, The Elite 22 beats the Ruger hands down. And for value, it ranks above the Volquartsen Custom, too, with comparable quality at half the price. Now that it is available in matte and satin clear, there is no reason to use anything else. The technical support is terrific, too. On those rare occasions when I have needed them, the folks at Tactical have been there for me with the answers. Keep it up, folks.
7 people found this helpful. Was this review helpful to you?