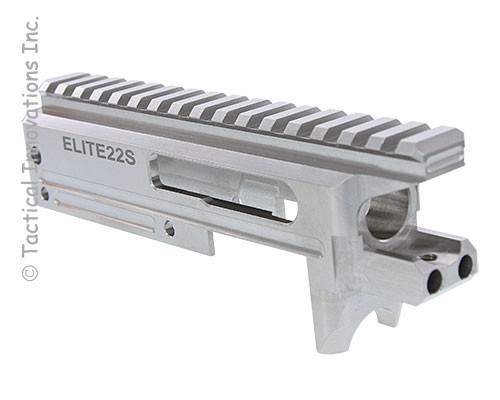 You guessed it!  ELITE22S™ and the "S" is for STAINLESS STEEL, 416R Ordnance Grade to be exact.  If you're a shooter that demands excellence and precision, we have raised the bar again for 10/22® compatable receivers.  Our ELITE22S™ receiver continues to push the limits of perfection by deliverying more strength and durability than most shooter need, but for high volume and precision shooters, only the ELITE22S™ delivers the chassis that aluminum can't compete with.  The ELITE22S™ receiver is not aluminium that looks like stainless...  its a 100% precision CNC machined receiver that is made from a one piece solid block of ordnance grade 416R stainless steel to provide the strongest, most durable receiver available for your custom rifle build.

The ELITE22S™ holds true to the original Ruger® 10/22® proven design with v-block barrel attachment, twin cross pins for trigger assembly attachment and the provision for a bolt buffer while of course being able to use all 10/22® compatible magazines.  In addition to the unparalleled strength of the 416 ordnance grade stainless receiver material, our ELITE22S® receiver is loaded with the features that easily separate it from other receivers such as a cleaning hole in the rear of the receiver to be able to clean the barrel from the chamber to the muzzle as well as an integrally machined extended picatinny rail, all incorporated in a polished stainless finish that is professionally laser engraved in accordance with ATFE regulations.

Now serious target shooters, competitors and varmint shooters, as well as plinkers and recreational shooters and collectors that appreciate timeless quality can enjoy the strength, durability and precison that only a billet machined one piece stainless steel receiver with an integrally machined solid extended picatinny rail, such as the ELITE22S™ can provide.

Regardless of the rifle configuration you want to assemble, our ELITE22S billet stainless steel receiver provides and uncompromising and unmatched foundation.  Contact your dealer to order your receiver today!