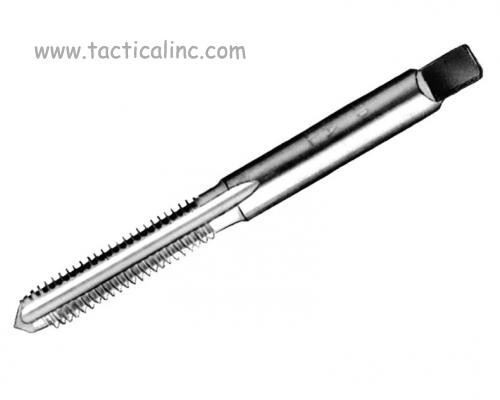 The 8-32 rail is easily installed on your factory 10/22 receiver using these 8-32 pointed taps.  Installation is quick and easy and does not require any tools other than a hand tap holder.

You should not drill the holes in the receiver.  Simply apply some heavy oil to each of the holes and then with a hand tap (not a drill etc), gently and carefully screw the taps in to the existing holes as you feel the tap begin to cut.  The receiver material is soft enough and the holes in the receiver are already large enough with the existing thread for the 8-32 taps to simply cut the holes to the one size larger thread.  Screw each tap in beyond the pointed cutting surface of the tap (about 1/3 of the tap) and then unscrew the tap.  Repeat for each hole and then blow the holes out with compressed air to remove any metal chips while not scratching the receiver.

You can then install our 8-32 rail with the screws included with the rail which will provide considerably more thread for a positive lockup between the rail and the receiver.  A small amount of Locktite is preferred to ensure that the screws never loosen unintentionally.  Use caution not to over torque the 8-32 screws.  It will require more force to strip the 8-32 screws than it would for the factory supplied #6 screws, but the aluminum receiver material can still be stripped even with the 8-32 screws if too much torque force is applied.