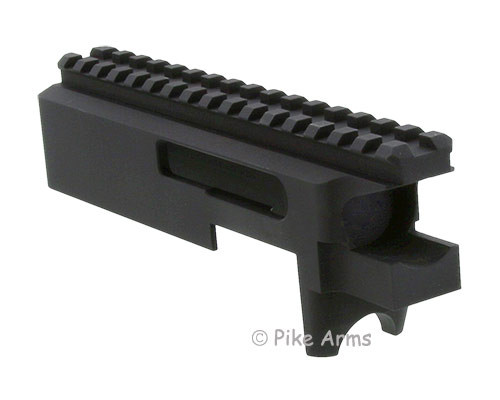 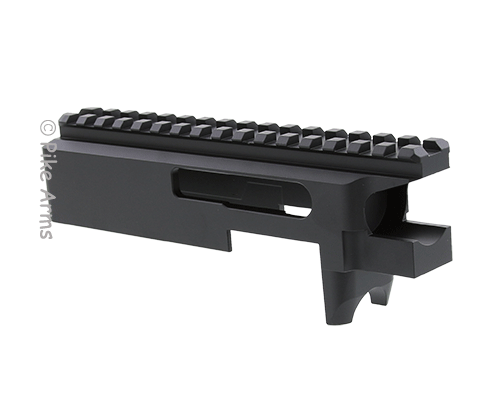 Now you can easily complete a 10/22® TAKEDOWN style compatible receiver to build your own custom rifle or pistol using the Pike Arms® ATF approved ELITE22TD™ PICATINNY RAIL 80% receiver blank.  We've already done the heavy machine work to get you close without yet completing it enough for ATF to consider this receiver blank to be a restricted receiver.  Although this 80% receiver blank is not federally classified as a firearm per ATF's evaluation and determination letter, you should also verify that completion of the receiver is done in compliance with all state and local regulations prior to completing the receiver blank into a functioning receiver.   This 80% blank is EXACTLY the same as our completed ELITE22TD™ PICATINNY RAIL Takedown Receivers but does not have the final machining done (which are all just holes) in order for it to NOT BE classified and restricted as a finished receiver so it can ship directly to you.

We have all of the profile machining done as well as the bolt pocket and the mag well.  All you have to do to compete the receiver is:

Hole placement to complete the ELITE22TD PICATINNY RAIL 80% blank into a functioning receiver can easily be determined by using the Machinist Drawing on the tab labeled "Machinist Drawing" above or by using our PIKE ARMS® ELITE22TD™ RECEIVER HOLE LOCATING DRILLING FIXTURE (Part #09225 available separately) which provides exact hole placement as a template.  Also available is a PIKE ARMS® 80% RECEIVER TOOLING PACKAGE (Part #04486) that includes all the correct size drills to complete the receiver. (See "Related Products" section below)

This Pike Arms® ELITE22TD™ PICATINNY RAIL 80% Receiver Blank is a stripped receiver and does not ship with any additional hardware or parts which will be necessary to complete the receiver into a functional firearm.  In order to complete the receiver into a takedown model that is compatible with a Ruger® Takedown rifle, you will need the following receiver hardware bushing assembly which can be purchased in one package as part #08626, or purchased individually as:

After your receiver has been completed by drilling the remaining holes and by pressing the barrel bushing assembly into the now drilled hole, you can easily complete a 10/22® style compatible rifle or pistol that can then be assembled with Pike Arms® billet machined parts for a high quality custom rifle or pistol.  Please note that other manufacturer's parts will often have varying tolerances over which we of course would have no control.  Although we guarantee our Elite22® receivers to function with either Pike Arms® parts or Ruger® factory parts, assembly with other third party manufacturer's parts would be your responsibility for compatibility and function.

In order to then assemble your receiver into a complete rifle or pistol you will need the following parts:

9. Receiver / Stock Takedown Screw  (2 Required For Takedown - One for stock and one for barrel assembly)

Assembly is as easy as re-assembling a rifle that has been stripped to its major assemblies for cleaning.  All of the more difficult parts when purchased from us are already pre-assembled for you (such as the trigger assembly and the bolt) and are simple drop in parts.   For tools, you will need a pack of allen wrenches and in less than an hour, and you can easily complete and assemble your own custom rifle.

In order to complete your 80% RECEIVER BLANK, you will need the following drill bits and tap:

11/16 Drill Bit               (barrel hole)
#16    Drill Bit               (12-24 tap drill)
3/16"  Drill Bit               (trigger pack holes)
1/4"    Drill Bit               (buffer hole)
1/8" x 8" Long Drill Bit  (op rod detent)
12-24 tap
The complete tooling set is available as a TOOLING PACKAGE (part # 04486) that includes all the correct size drills to complete the receiver.
COMPLETION OF THE RECEIVER REQUIRES METAL DRILLING WHICH SHOULD ONLY BE ATTEMPTED BY PERSONS WITH SUFFICIENT EXPERIENCE AND TRAINING TO COMPLETE THE OPERATIONS SAFELY.  IF YOU ARE UNFAMILIAR WITH OR UNSURE OF ANY OF THE PROCESSES DESCRIBED HEREIN, YOU SHOULD NOT PROCEED AND YOU SHOULD SEEK COMPETENT ASSISTANCE.
CAUTION: The drill fixture to complete the Pike Arms 80% receiver (available separately) is hardened to ensure its accuracy for multiple "drill through" uses.  However, since it is hardened steel, you must ensure that each drill bit is exactly lined up with your fixture holes (especially for the barrel hole) if you intend to drill through the fixture to complete the receiver.   If the drill bit catches on the drilling fixture due to any misalignment or runout in the drill press spindle, its possible that you will either chip or break the drill bit or will damage the fixture.  Accurate, precise alignment is required.  Damaged tooling (drill bits, taps etc) purchased from Tactical Innovations will not be replaced and can not be returned after they have been used or show any signs for being placed in a drill chuck.  Please advise if you have a defective drill bit PRIOR to use.

RIGHT SIDE OF RECEIVER:

NOTE when drilling holes that go though both sides of the receiver, we drill them from each side individually and not all the way through in one pass.  This will help prevent misalignment.

Change to a 3/16" drill bit in order to drill the trigger assembly cross pin holes, labeled on the jig as R2 and R3.

DO NOT DRILL B1 AT THIS TIME.  IT IS NOT DRILLED ON THE RIGHT SIDE.

LEFT SIDE OF RECEIVER:

Using the same 3/16" drill bit, drill the left side of the L2 and L3 holes for the  trigger assembly cross pin holes.

Change back to the 1/4" drill bit and now drill the left side of the buffer hole marked on the jig as L1.

The rear / back of the receiver has the ability to have a clean out hole included as an option.  If you want to be able to run a rod through the receiver to push the rod out the muzzle (a preferred method) then you will have to drill the rear cleanout hole.

Remove the jig.  The rear of the receiver is complete.

Using the barrel portion of the jig, slide the jig into the receiver and clamp between the bottom of the jig and the top rail of the receiver.

With the receiver in a vice and ensuring that it is exactly vertical and not leaning in any direction, use an 11/16" drill bit to drill the barrel hole marked F1.  It is VERY important that you get this hole straight since it will determine the alignment of your barrel in the receiver.  If this hole is not straight, your barrel will not ever be able to be aligned with your scope.  The rear of the receiver is exactly parallel to the position that the hole needs to be drilled so you can stand the receiver on its end.  Since you are going to be drilling a big hole, make sure that you have it very securely clamped in a vice before drilling the hole.  This is the one step that someone with some machinist background would be very useful to have assist.

In the event you incorrectly drill the barrel hole, there is of course no way to "move" the hole or similarly "un-drill it".  However, we do sell a steel bushing that can be used to save receivers that have this hole incorrectly drilled which are available in either blued finish (Part #06706) or stainless steel (Part #06707).  The hole would then need to be correctly MILLED (not drilled) to the over size diameter to match the bushing and the bushing would be pressed in, resulting in a perfect barrel to receiver mating surface.

With the jig in the same position, change to your #16 drill bit and drill the two cap screw holes marked F2 and F3 for the V-block cap screws.  Drill these holes all the way through.

Depending on the cap screws that are used to attach the V-block as well as the length of the tap you are using, it is often requred or desired to counterbore the two threaded holes (identically to Ruger factory receivers) to allow the cap screws be screwed all the way in tightly since many do not have threads all the way to the shoulder head of the screw.  If you want / need to counterborek the holes, use a 1/4" drill bit and drill into the same holes for approx .500 (half of an inch) to provide clearance for the cap screws.  DO NOT over drill the holes.  If you drill them too deeply to counterbore the holes you will not have enough threads left to torque the v-block cap screws and the receiver will be unusable.

Using the same #16 drill bit, flip the receiver so that it is on the rail and drill the stock attaching screw hole in the bottom which is not marked on the jig.

Remove the jig.  All exterior holes have been drilled and the jigs are no longer required.

The last hole that needs to be drilled is the detent for the spring op rod.  The spring op rod detent is a small pocket that is required in order for the op rod to stay correctly in place in the receiver when assembled.

Change your drill to the 8" long 1/8" drill bit.  With the receiver standing on the rear of the receiver (same position as you used to drill the barrel hole), drill through the barrel hole all the way down to the small exposed surface and carefully spot the area for the op rod.  This is a detent and not a deep hole.  Do not drill this hole too deeply.  You can use an op rod to "feel" if you are deep enough which is indicated by the rod securely staying in the detent and not being able to be easily pushed out of the detent.

10A. Using a 12-24 tpi tap, hand tap the two cap screw holes for the V-block all the way through.  Make sure to use oil and extreme care not to overload the tap and snap it off in the hole (which would render the receiver not usable).  It will appear that the tap in our tooling kits is not long enough, however if you correctly conterbored the holes approximately .500 for cap screw thread clearance, then you will have more than ample tap length to thread the holes.

1. All of the holes will be below the stock line and will not be visible when the rifle is assembled.  However, if you want the drilled holes to also be black, you can use Birchwood Casey ALUMABLACK (Our Part #02210) on the holes to blacken the newly drilled holes to match a black receiver.

2. If any of the holes are too sharp, they will need to be deburred with either a larger drill bit or an exacto knife etc.  All holes should be smooth at the surface.

Your receiver is now complete and may be assembled the same as any other 10/22 style receiver. 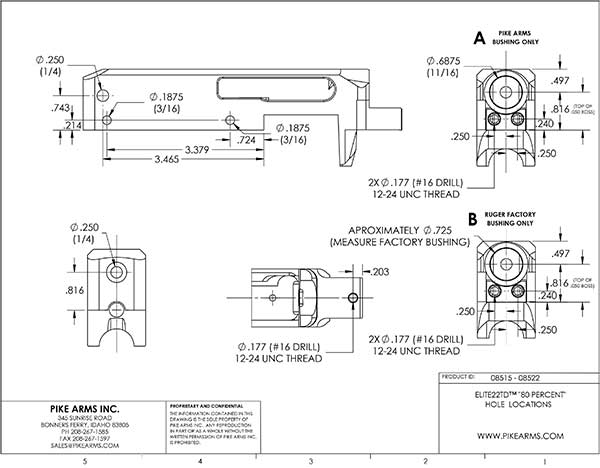