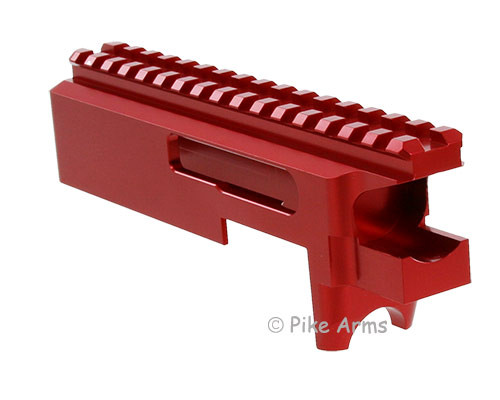 Now you can easily complete a 10/22® TAKEDOWN style compatible receiver to build your own custom rifle or pistol using the Pike Arms® ATF approved ELITE22TD™ PICATINNY RAIL 80% receiver blank.  We've already done the heavy machine work to get you close without yet completing it enough for ATF to consider this receiver blank to be a restricted receiver.  Although this 80% receiver blank is not federally classified as a firearm per ATF's evaluation and determination letter, you should also verify that completion of the receiver is done in compliance with all state and local regulations prior to completing the receiver blank into a functioning receiver.   This 80% blank is EXACTLY the same as our completed ELITE22TD™ PICATINNY RAIL Takedown Receivers but does not have the final machining done (which are all just holes) in order for it to NOT BE classified and restricted as a finished receiver so it can ship directly to you.

We have all of the profile machining done as well as the bolt pocket and the mag well.  All you have to do to compete the receiver is:

Hole placement to complete the ELITE22TD PICATINNY RAIL 80% blank into a functioning receiver can easily be determined by using the Machinist Drawing on the tab labeled "Machinist Drawing" above or by using our PIKE ARMS® ELITE22TD™ RECEIVER HOLE LOCATING DRILLING FIXTURE (Part #09225 available separately) which provides exact hole placement as a template.  Also available is a PIKE ARMS® 80% RECEIVER TOOLING PACKAGE (Part #04486) that includes all the correct size drills to complete the receiver. (See "Related Products" section below)

This Pike Arms® ELITE22TD™ PICATINNY RAIL 80% Receiver Blank is a stripped receiver and does not ship with any additional hardware or parts which will be necessary to complete the receiver into a functional firearm.  In order to complete the receiver into a takedown model that is compatible with a Ruger® Takedown rifle, you will need the following receiver hardware bushing assembly which can be purchased in one package as part #08626, or purchased individually as:

After your receiver has been completed by drilling the remaining holes and by pressing the barrel bushing assembly into the now drilled hole, you can easily complete a 10/22® style compatible rifle or pistol that can then be assembled with Pike Arms® billet machined parts for a high quality custom rifle or pistol.  Please note that other manufacturer's parts will often have varying tolerances over which we of course would have no control.  Although we guarantee our Elite22® receivers to function with either Pike Arms® parts or Ruger® factory parts, assembly with other third party manufacturer's parts would be your responsibility for compatibility and function.

In order to then assemble your receiver into a complete rifle or pistol you will need the following parts:

9. Receiver / Stock Takedown Screw  (2 Required For Takedown - One for stock and one for barrel assembly)

Assembly is as easy as re-assembling a rifle that has been stripped to its major assemblies for cleaning.  All of the more difficult parts when purchased from us are already pre-assembled for you (such as the trigger assembly and the bolt) and are simple drop in parts.   For tools, you will need a pack of allen wrenches and in less than an hour, and you can easily complete and assemble your own custom rifle.