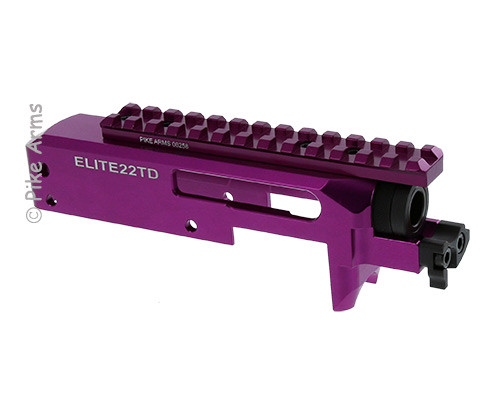 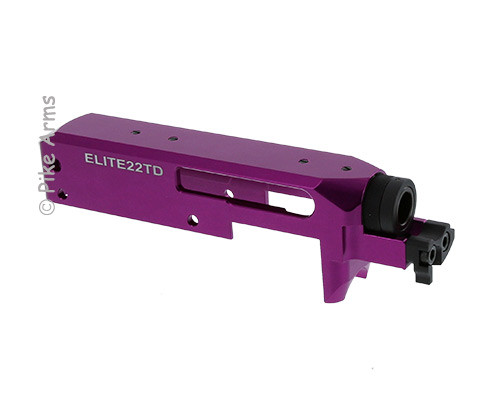 The Tactical Innovations® ELITE22TD™ PURPLE TAKEDOWN BILLET RECEIVER is 100% compatible with Ruger® factory takedown rifles and pistols and provides an ATFE compliant "virgin" receiver for custom builds in your choice of either a rifle or pistol configuration.  Each receiver is shipped complete with all takedown related receiver hardware necessary for a takedown rifle and  is 100% compatible with both Ruger® factory and Pike Arms® takedown barrels.  The ELITE22TD™ receiver is CNC machined from billet aircraft grade aluminum and the takedown hardware is also CNC precision machined from billet steel and then professionally heat treat hardened for durability, long life and exceptional quality.  No parts are MIM injected, cast, plastic or similar.

Each receiver is available in either the standard flattop configuration for use with iron sights (with the scope rail holes pre-drilled and tapped and filled with appropriately sized screws) or with a matching color billet picatinny extended rail (mounting screws included) for use with scopes and similar optics.

The ELITE22TD™ receivers will ship assembled with the takedown related receiver hardware installed.  The optional picatinny rail in your choice of colors (should you select one with your receiver purchase) will ship not attached to the receiver and can easily and quickly be installed with the supplied screws as part of the assembly process.   The barrel specific hardware (the parts that remain attached to the takedown barrel when the barrel is removed) are not included with this Elite22TD™ receiver but are available in a bundle as part #08651.

While this receiver is completely machined, anodized and serial numbered which requires a transfer through an FFL dealer, as an option we also offer an identical 80% version for the "do it yourself-er" (part #08515) which is ATFE approved as an unrestricted non-firearm.

If you've wanted to build a high quality billet takedown style rifle or pistol while maintaining compatibility with Ruger® factory parts and takedown barrels, this ELITE22TD™ receiver is the perfect quality foundation for your custom project.

Thank you for your purchase of a Tactical Innovations ELITE22TD™ receiver.   The receiver is precision CNC machined from aircraft 6061 grade aluminum to provide years of reliability and pleasure.  Please review these assembly instructions and tips before attempting to assemble your receiver.

The receiver can be assembled with Ruger® factory parts or a custom rifle can be assembled using Pike Arms&reg; billet machined replacement parts.  Parts manufactured by third party companies may also work but the use of parts from multiple /  different manufactures can often be problematic and require additional fitting and troubleshooting as a result of the variable tolerances for each part from each manufacturer over which we of course have no control.

The barrel for the ELITE22TD™ receiver is installed using the supplied receiver hardware and the optional necessary barrel and barrel hardware.   The receiver provides an adjustment ring identical to a Ruger® factory takedown rifle in order to ensure a tight lockup between the barrel and receiver.   Prior to installing a barrel in the receiver, familiarize yourself with the operation of the takedown hardware and ensure that the bolt is retracted in the receiver.

The width of the bolt is critical for safe and reliable operation.  Ruger® factory bolts that have been “polished” will often then be too thin from the polishing process removing metal and a slam fire condition is possible.  Do not use a Ruger® factory bolt that has been “polished” or otherwise modified in any way without having its width checked for safe operation by a competent gunsmith in order to prevent slamfire conditions.  When assembling your rifle, ensure that the bolt that you use is wide enough to not allow the bolt to hit the rim and fire the round if the bolt is pushed all the way to either side of the receiver.  The entire rim of the round should always be in the corresponding pocket of the bolt regardless of the left or right position of the bolt in the receiver.

Reliable function and operation requires that all parts successfully work together as intended.  Many issues can be determined and resolved by substituting known non-issue parts out of the assembly one at a time until the problematic part(s) are identified.  Although the majority of rifle assemblies can be completed without any issues (especially when using either all Ruger® parts or all Pike Arms parts), you should seek competent professional gunsmithing assistance should you encounter a situation that exceeds your comfort or experience level.  Upon request, we are happy to perform a comprehensive measurement and quality check on any of our receivers but we do not offer assembly or trouble shooting gunsmithing services.

The Pike Arms® ELITE22TD™ Takedown Receiver is loaded with features that easily separate it from a factory receiver while still being compatible with factory parts as well as billet Pike Arms® Parts to complete it.

Tactical Innovations® manufacturers five different models of 10/22® compatible receivers.  Each receiver model allows customers to get the exact features they desire for their custom rifle or pistol build.  All Tactical Innovations ELITE22 Series receivers are 100% billet machined and are available in a variety of popular colors and finishes.  Here is a summary of the receivers that are available and the primary differences between each:

The ELITE22™ is the original and time proven receiver that provides a billet precision CNC option for custom built 10/22® platform rifles and pistols.  It incorporates an integrally machined picatinny rail for scopes and similar optics.  It charges and ejects from the right side identically to a Ruger® factory receiver.  The ELITE22™ is available in a variety of popular colors and is assembled with a traditional v-block for barrel mounting.

The ELITE22S™ (S=Stainless) provides all the features of the ELITE22™ while stepping up from aircraft billet aluminum to 416R ordnance grade stainless steel.  Each receiver is still machined from a solid billet (not a casting or forging) and has the picatinny rail machined into the one piece receiver (the rail is not a separate bolt-on accessory).  The ELITE22S™ is available in a polished stainless finish as well as in a black nitride matte black finish.  For precision and high volume shooters that demand the ultimate in durability and strength, the ELITE22S™ is unmatched for a receiver platform.

The ELITE22D™ (D=Detachable Rail) is a billet aluminum receiver that is identical to the ELITE22™ receiver except for shooters that prefer a flattop recevier for use with barrel mounted iron sights, the "D" receiver has a rail that is bolted to the receiver (using four heavy #8 cap screws) which can easily be removed for iron sights or installed for use with scopes or similar optics.  The ELITE22D™ receiver also allows custom builders to personalize their rifle by combining different colors with the receiver in one color and the rail in either the same or a different color.

The ELITE22D™ replaces the discontinued ELITE22F™ model, which while also a flattop, the discontinued ELITE22F™ model was exclusively for use with barrel mounted iron sights and had no provision to add a picatinny rail at a later time.   The current production ELITE22D™ receiver permits the use of both flattop iron sights as well as the option to bolt on a picattiny rail if desired.

The ELITE22LC™ is a patented "Left Charging" billet receiver that has the identical features of the ELITE22™ with the added functionality of left side charging handle access.  The ELITE22LC™ is NOT a left handed firearm and the brass still ejects out the right side of the receiver.  However, for right handed shooters, you can now keep your right hand on the stock and easily charge or clear the receiver with your left hand on the left side of the receiver, similar to an FAL or a Galil design. The ELITE22LC™ ships with the included left charging handle assembly (handle, rod & spring) in the same color as the receiver.  Different color charging handles, if desired, can easily be swapped by the customer with the removal of one screw.

The ELITE22TD™ (TD=TakeDown) provides the quality and features of the ELITE22™ receiver with the included additional receiver hardware to permit takedown functionality in order to quickly remove the barrel assembly with no tools necessary.  The receiver has a removable picatinny rail (identical to the ELITE22D™ receiver) and can be used either with barrel mounted iron sights or with a scope or similar optics by simply bolting the picatinny rail (in your choice of colors) on or off the receiver.  The ELITE22TD™ receiver ships complete with all takedown related receiver hardware already installed.